Not long ago I have started to read the 4th book of "Game Of Thrones" - "A Feast For Crows". I I have not seen the TV show, And I wish to stay with books.  a challenging yet fulfilling task.
The book is full of characters, and unfamiliar words and violence and dark humor. And yet it is amazing. Mostly because of its resemblance to our own rough reality, and also for its diversity and enchantment. Two things that are overlooked today in our  scientific and rational way of living.

The name of the book implies of a way to look at life - as a game. I wrote before (in Hebrew) about my own game and also translated a chapter from Charles Eisenstein's book "The Ascent Of Humanity" called "Back To Play". you can read the original English chapter here.

So if life is a game, then what are the rules? and why do we need rules?

Learning At The Beach

Yesterday I came back from a weekend on the beach with friends and family, and some other nice hundreds strangers who came to celebrate in a nice spontaneous gathering. The Music and the location were set by a group of friends called "The spirit gang", and all the people were invited to come and bring their own things, and to participate in the expanses as much they wished, in the spirit of the gift.

We gathered some dozen friends, one family with toddlers (pardon my high English, it is George Martin's fault), and settled a camp between all the other tents of families and fiends who came to spend a nice Saturday of sea and music. The weather was amazing, cloudy and windy which is good for the hot summer days in Israel. The sea was rough, but the spirits were high. A Kraken shaped kite was hanging in the sky, reminding me of the god of the Iron Isles. 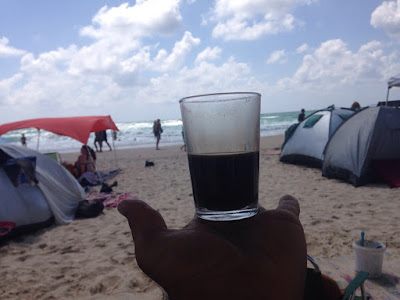 Since the music was not my cup of tea, what I spent my time mostly was playing with my friends' children and with my own friends, the grown children :)
One of my favorite games is Frisbee. I always carry with me a couple of discs, to play with whoever comes around. Sometimes, when there is no one to play with. or when the wind is too strong to play with others, I play with myself. Actually I play with the wind. I call it 'playing with god'. It teaches you that the way you throw the disc will affect the way it will come back to you. Same as life. What goes around, comes around. Here is a small sample:

There are many games that can be played with Frisbee. There is of course Ultimate Frisbee where two teams play each other trying to score goals, but unlike Football or other competitive games, the players are the referees as well.

In general I find Frisbee a non-competitive game, and this is one of the reasons I love it so much. Most of the time the game is just for fun. Just trying to throw the disc exactly to your partner's hands, while trying to improve your skill and to reach higher level of beauty in handling the disc.

So in freestyle Frisbee there are no rules. Just levels of skill and cooperation. And this is something which is missing in our modern culture - to play with each other and cooperate,but not for the goal of winning or fame and success. Instead, to find the meaning in the doing, and reach higher levels of beauty, fun and creativity.

The Game Of God

As other secular people, I celebrate the holidays, but I do not know much about them. I also do not know much about the connection of our people to this land of Israel/Palestine/Kna'an. So I read, to understand better the rules of the game, the game of God. And it is a strange game I must say. full of death, and punishment and awe. But I still believe there is a more profound insight in the message written in this story.

After me and my friend finished to read the weekly portion at our camp on the beach, another friend came to us and shared with us her concern about people "becoming religious".  She said it usually make people become strict and can sometime create distance and break good friendships and family relations. I understood her concern, but I also rejected it, and pointed out to her, that many secular people are not willing to accept the choice of a person to live by certain rules, i this case, the rules of the Torah or the Halacha. And by this they are doing exactly what they fear from - distancing a person just because he now lives by different rules or values.

The game of god - what people might call religion, is not understood to me, and I wish to understand more. This is why I learn. By reading the Torah. By talking to friends who come from religious background. By reading Hasidim legends and also by listening to Atheist people talking about proof of lack of god:

The game of cooperation

In his last chapter of the book "The Ascent Of Humanity", the author speaks about playing beside the tower. The tower of Babel that is. The tower that is about to collapse. Our civilization of separation:

"Instead of focusing on survival ("making a living"), our interaction with the world will be our play. After all, our purpose is to understand, appreciate, and participate in nature's ongoing creation of new realms of beauty, and how do we do that? It is through play. Isn't that how a child learns to "understand, appreciate, and participate" in the world? In a sense, the entire course of separation has been nothing but a cosmic play; the difference will be that we will no longer be lost in the game, no longer oblivious to the illusory nature of our separation. With this consciousness, our play will become again playful.
The parallel with storyteller consciousness, described in Chapter Seven, is significant, and in fact play and storytelling are deeply connected. Play is an enactment of a story, a provisional reality with its own rules and agreements. As we become conscious creators of our stories, so also we become conscious players in the cosmic game. All the accouterments of the separate human realm—label and number, images and machines, technology and culture—become our playthings and the instruments of our art. No longer unconsciously lost in that separate human realm, we are free to reunite it with the natural. We reunite its linearity with the rest of the cycle from which we tried to separate it. We reunite its symbols and stories with our conscious creative intentions. We reunite its technology with the purposes and processes of nature. Wielding our gifts consciously now, we can create a human realm no longer at odds with the natural."

So I read the "Game Of Thrones" and I read the Torah, trying to understand the game that we are playing, so I can enjoy it more, and to find other people who want to play this game with me. As I go in this path, I find more and more. People who wish to share and cooperate instead of competing and fighting.

And in a way this is also a good strategy of survival, because the evolutionary idea of "survival of the fittest", does not necessarily speak of the strongest individual, rather it relates to the group or specie that can adjust and cooperate best with each other. As I explained to a friend who asked me about my weird habit of waking up in 4 in the morning to watch the games of the NBA finals - I do not care who is the team who wins. What attracts me is to see two teams competing one another on who is the best one to cooperate among its members. And in this sense I find competition healthy, when it drives you to self improvement, rather than just being better than the other.

Basketball is another love of mine, a game of cooperation and creativity, as well as many other follies which are part of professional and commercial sports. What I like there is players who remember this is just a game, and yet they are willing to commit themselves fully to this game.

A good reminder for us that life is just a game are children. With their spontaneous creativity and their joyful curiosity. I want to finish with such a reminder from the champion team's best player - Steph Curry's daughter - Riley, as they give an interview to the sports channels' journalists. May we remember this is just a game and find more joyful and less harmful ways to play it.