It is not normal to be normal

This time I will write in English,
because it is time this blog will go global.
Blogal...

I wrote in english once before, about a year ago,
and I want to write more in this language since I think my story is universal.

It has been two and a half years since I left my house, my job, my cat,
and started traveling around Israel and Palestine.

Now I Reside In a place called Eco-ME,
a center with peace and ecology located next to Jericho.
Eco-ME is a project, that runs every year from December to June, and this is its fifth year.
It a community based project, and every year the community changes,
but the relations between the people keep on going.

I feel this is a very special place, unique,
because it brings Israelis and Palestinians together,
to speak not only about a solution for the conflict,
or an end to the occupation,
but also and mostly, about what it means to be humans,
and to live in peace with each other and the land,
in a world that is immersed in war,
a world of violence, of ecological and human crises.

The last war on Gaza was one of the worst our country knew.
not merely because of the number of dead and human disaster it has deepened,
but mainly because of the despair it wrapped around the peace seekers,
both Israelis and Palestinians,
and the racism and verbal violence it has legitimized.

In the light of the great despair many around me are experiencing,
I find great hope and motivation in creating a different reality,
in creating an alternative,
that for sure is small and margin but non the less with great significance.

"We cannot solve our problems with the same thinking we used when we created them."
Albert Einstein

The approach he expressed is not realistic nor human, because you can not solve one problem by creating another worse problem. The same I say to Israelis who say all the Palestinians should leave to Jordan or live in Israel as residents without rights.

What i want to suggest is a new world view, regarding how to refer the land. The land of Israel and Palestine, and the land of all planet earth.

It is said by the Torah that the land of Israel belongs to the Jewish people.
It does not mean that we own it.
In the same sense, the Earth is not owned by humans.
On the contrary, we belong to the earth.
We belong to this land.

Can we live the sense of belonging without practicing ownership?
In a world almost completely commercialized,
a world of  institutionalized violence,
a world of contracts and competition,
It is very difficult to see a different way, and it is more difficult to act in this sense.
But this what we are trying to do here in Eco-ME,
we try to build peace on a land that we do not own,
and still to feel we belong to, because we care about it.

This brings to question the whole of our economic system,
our political institutions and our very sense of self.
If the land, home, money and all the things I inherited or accumulated,
sometime through hard work,
if all this things are not mine, then who's are they? and what do I get left with?

I started to question these questions some years ago,
and this is why I became a nomad.
If the world that I live in is consuming all the good of the earth,
and destroying lives and places in ongoing wars,
maybe it is time to stop worry about my own future,
and start taking care of our bigger home -
Planet Earth, with all its living beings.

so some of you may think I am crazy.
some of you already know I am,
some try to normalize me, and I, like some Palestinians, oppose normalization
but not the normalization of relationship of Palestinians and Israelis,
as if the occupation does not exist,
but the normalization of trying to live a "normal" life,
in which everyone can grow up peacefully, go to study, have a job, a house. a family,
while we are consuming Earth's natural resource, enslave all the farm animals, and extinct all the rest.

It is not normal to pay taxes, while the money goes to finance wars.

It is not normal to worry about pension or life insurance,
while we destroy the future of our children,
by creating climate change and intoxicate the land and the oceans .

It is not normal to watch sports and entertainment on television,
while our world is being devoured by our growing egos and greed.

It is not normal to elect a person every few years and be dissapointed again and again,
and still believe that this is the most important thing to do as a citizen.

It is not normal to take a shit in drinking water,
while third of the world does not have available and clean water.

It is not normal that there is only one place like Eco-ME,
and thousands of McDonald's branches.

Thank god I am not normal!!

hope we can lose our minds together in peace.
because we are never going to survive unless we get a little crazy. 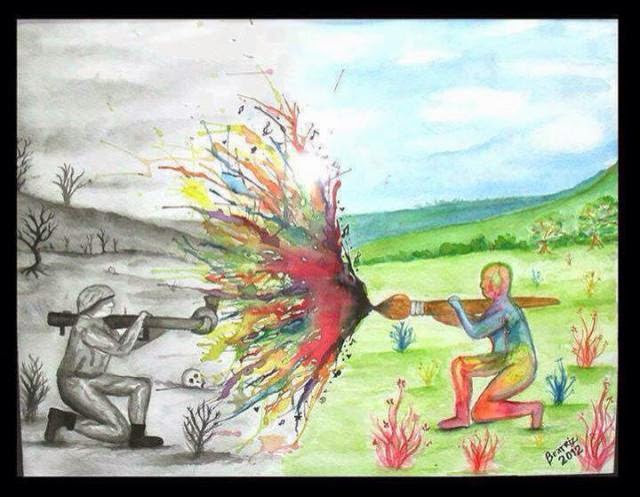